At the Bob Dylan Concert

The machine spit out two tickets.  The Dylan concert was just one week away. “Wow, these are awesome seats, “ exclaimed the attendant. “I don’t know how that happened.”

I did, of course. It was on account of clean wholesome living. But why rub her nose in it….just one individual person? I kept my mouth shut. Better to post it all on the internet later.

I don’t go to many concerts. My wife, Mrs. Sheepandgoats, made me go to an outrageously priced Josh Grobin concert a year or two ago, but other than that, I can’t remember the last time I went to one. A couple of times with the kids, maybe, when they reached the age where they wanted to see this group or that group and I wasn’t real happy about it so I thought I would go along myself to hear what they were listening to, much to their embarrassment. That's how I found myself listening to Weezer at the Water Street Music Hall. Wasn't I the only grown-up there? Oh, and there was that Ani DiFranco concert a few years back that I attended with my daughter and son-in-law. Is Ani the next Bob Dylan? She's every bit the poet and innovator he was at that age. Her lyrics are a bit cruder, but then....it's a cruder age, isn't it?

Also, free concerts don’t count, such as the ones the city sponsors each year for the Lilac Festival. This year it was Maria Muldaur.

Bob Dylan is not a kid anymore. He tours a lot; his calendar lists 98 gigs in 217 days in Europe and North America. Doesn't he also host an XM radio show? I’ve never heard him live, not even last year when he made the rounds of minor league baseball stadiums, a cool idea if ever there was one. (Frontier Field in Rochester) His body of work is pretty broad by now, so I figured the time was right. I went with my son. Gordon Field House on the RIT campus. The attendant was right; ours were good seats, center stage, 5 rows back. I could have hit Dylan with a shoe and knocked off his hat had I wanted to.

For some reason they also let in the Democrat and Chronicle music critic, whom I haven’t trusted ever since he trashed Alanis Morrisetteonly because Alanis wouldn’t give him an interview. Had she paid her dues yet, so that she could snub The Critic? There was venom in his consequent review, so it seemed to me.

Sure enough, he trashed Bob Dylan as well, trying to make me mad. Dylan growled through his songs, he asserted. They were “incomprehensible.” People tolerated his old songs well enough, he groused, but got impatient with the new material. Actually, I  (5 rows back) hadn't noticed that. Frankly, the old & the new sound pretty much alike. Dylan doesn't have much range in his voice anymore, and he's rewritten his old material so he doesn't need range. That he can do so & get away with it (he did, handily) is testimony to his versatility. Seemed to me that everyone was pretty enthused and got more so as the night wore on. But if you came with your old Dylan records under your arm, looking forward to sound-alikes, you might have been bummed.

Furious, I came to Bob’s defense, and told off that Critic on his own blog. But to my chagrin, some sorehead bloggers also chimed in to agree with him. Ah, well…

I was slow to warm up to Dylan’s music. Highway 61 Revisited, with its Kafka-like lyrics, logically loose yet emotionally tight, did nothing for me until I revisited it years later. Then, the more I learned of Dylan, the more interesting he seemed. Any number of times he changed genres, without regard for what role he was “supposed to” play or who might be put off. He started as a folk singer, and the folk singing crowd soon imagined they owned him, so he was roundly booed when he first appeared with electric instruments. And you should have heard the born-agains when he released Slow Train Coming. He’d been saved! But by next album or two it was clear it had all been a ruse, or a short lived fad at best. He just wanted to play with that kind of music! Some of those born-agains tossed him right back into hell.

He broke the three minute song rule with impunity; he’d write songs however long he wanted to write them, sometimes five minutes, sometimes ten, sometimes more. He'd put ten syllables where there was only room for three, and get away with it. The media people would pound him with prying questions. He’d feed them nonsense, but they wouldn’t find out till later it was nonsense. When they complained he was being uncooperative, not answering their questions, he protested. He was cooperating; it's just that they were asking the wrong questions.  In this way he was able to raise a family in relative peace, and you get to know him through his work, not by what silly entertainment writers say about him. He fares well that way, for his lyrics paint him as a modest guy who values what is right. Has he ever penned anything mean-spirited?

Even now there’s some report about his treating his grandson's kindergarten class to a live show, just for fun. The boy brings him there for show-and-tell, I guess. I think I would ask him to do the same were I the teacher. "Hey, why don't you bring your grandpa in for show and tell?" But the classmates don’t quite know what to make of him. A source told the New York Post newspaper: "The kids have been coming home and telling their parents about the weird man who keeps coming to class to sing scary songs on his guitar”

Usually artists on stage will banter with the audience. Dylan didn't say a word to anyone. That's not to say he wasn't obliging. When they brought him back for an encore, he let loose with, not one, but two numbers, on top of an already generous concert. And then he appeared once again with the whole band to acknowledge applause, swaying back and forth himself. A few months after his concert, he again made newsin Rochester, in a roundabout sort of way.

Streaming out of the gymnasium onto the parking lot, we all had to make way for the Bob Dylan bus; actually two buses, the first towing a trailer. Headed to the next gig in Pittsburgh, getting an early jump. 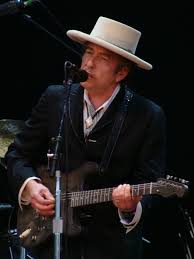 What Good Am I,  by Bob Dylan

What good am I if I'm like all the rest,
If I just turned away, when I see how you're dressed,
If I shut myself off so I can't hear you cry,
What good am I?

What good am I if I know and don't do,
If I see and don't say, if I look right through you,
If I turn a deaf ear to the thunderin' sky,
What good am I?

What good am I while you softly weep
And I hear in my head what you say in your sleep,
And I freeze in the moment like the rest who don't try,
What good am I?

What good am I then to others and me
If I've had every chance and yet still fail to see
Bridge: If my hands tied must I not wonder within
Who tied them and why and where must I have been

I was there too, thanks for the review. Great show! Especially that bit at the end about making way for the tour bus - I was cheering as I ran back to my dorm.

greetings sheepandgoats...we saw dylan in charlottesville virginia a few days before his rochester gig that you attended...like you we were enthralled by the ineffable power and energy he conjured...read somewhere that the rit show was enhanced with an on stage american sign language translator...must have been a real treat for bob to see his words literally put in motion...i think i could get through the rest of my life with only coffee cigarettes and my dylan sound library...thanks for sharing your views with us...tom engelman

Sounds like it was a good show, and your critic sounds like he/she needs a lesson in what makes good entertainment. Unfortunately though, we haven't seen Dylan "Down Under" for many a year. I did get to see Jackson Browne last year though, so I can't complain to much...:)

Row 3: Actually, I learned something about being too close to a concert. Row 1 was so close they had to look up and STAND up if they wanted a good view of the whole band. Of course, that forced row 2 to stand up, and 3, and so on all the way back. As you know, it took quite a while to get folks to sit. I'm not sure why they have that kind of seating.

Tom: Yep. There was sign language. And yep again, Dylan is my favorite.

Plonka: Remember, Dylan became a "theist" a few years back. He probably looked at the globe and concluded he would fall off if he came to Australia. That's why you'll never see me down under.

My only experience of a Dylan concert was very disappointing, primarily because of terrible accoustics. A reviewer in the local "Independent" (Research Triangle Park area of North Carolina) said that whoever was responsible for it "should be taken out and shot." It was so bad that my wife and I left after three or four numbers.

But I'm not sure that the kind of music Dylan was performing in those days (this must have been around 1985 or so) was that good. It wasn't the music I think of as "the music of Bob Dylan," which I love and always have. It was loosely, slovenly, amateurishly performed. Dylan perhaps bore some responsibility for the bad acoustics. I've heard that Neil Diamond, by contrast, paid (pays?--is he still performing?) a lot of personal, detailed attention to acoustical arrangements for his concerts.

For great Dylan songs, I almost wore out the little audiocassette, "Desire," that I owned, listening to it over and over in 1977. "Ashamed to live in a land where justice is a ga-a-ame...." And "Street Legal" and "Blood on the Tracks." Awesome.

Have you seen Martin Scorsese's documentary about Bob Dylan? Not to miss.

The comments to this entry are closed.